skip to main | skip to sidebar

The Father of the Arrow is the Thought 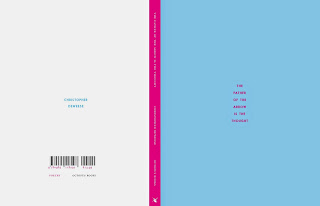 On August 25, 2015, Octopus Books will be publishing my second poetry book, The Father of the Arrow is the Thought. Here is some info about the book:

Christopher DeWeese’s second book, The Father of the Arrow is the Thought, re-says the human against the “fucked ecosystem” of the contemporary landscape. Locating themselves in a series of varied physiographic settings, these poems illuminate the tragic reality of our imaginations: that our bodies lag behind our minds; that our physical forms can never go so far as we can think, dream, or say. But this is not simply a book of elegy and woe. Drawing upon Paul Klee’s theory of “creative kinetics,” the idea of art defying physical laws through the use of symbolic, visionary, or transcendent imaginative acts, DeWeese presses past lament, uncovering something strange and complicated amidst "the uncharted lands/ I keep discovering inside/ no, behind me,/ where my bones I throw." Personal, surprising, questing, and ambitious, The Father of the Arrow is the Thought is a wild event, a new myth shot through time and space.


Dara Wier: There's nothing I can say that comes close to representing the precision presence of mind The Father of the Arrow Is the Thought lends us.  How and why human imagination is tragic, mysteriously omnipotent, grievous, triumphant and essential, is the book's story.  It proposes how we are who we are because of where we are, letting ideas about time and place be mythical and heroically proportioned.  DeWeese's poems, a unified collection of stand alone meditations, offer a new myth composed straight out of our 21st Century's hideous beauty.  The poems' heroic chronicle epics our situation and offers us redeeming compassion.  That we're able to imagine our way through, across, over, above, beyond and around just about anything, tempts us, teases us, and lets us see what can't be seen. In other words it brings metaphor to life, it gives imagination its most profound work, it simultaneously gives and takes.  No other recent book does all this with such a modest, kindly, almost chivalrous sense of duty.

Dean Young: The effect of this book reminds me of what we were told in physics class about approaching the speed of light. Fantastic and strange but somehow reasonable, these poems report from a velocity where the familiar seems verging on explosion with unexpected equipoise.  Astronauts, here is our pilot!

Here's a poem from the book:

It is a bad, bad business
to walk to the river
expecting something casually spiritual
to cast aside your skin.
Rocks tongue the bloody light
where I’ve been going,
a cheap motel
on the other side
where the complimentary bibles
have expiration dates
and the danishes reflect my face
in their glacial frosting.
We become magnificent
as they crumple,
bending in the fluorescence
our ancestors left us
to better see
our cruel bodies.
Outside, the evening quickens
into a crooked line
of poorly-built fires,
as if the whole county were neck-deep
in the moral ambiguity
of what anglers do
after taking off their waders.
The mosquito-bit air
darkens into night,
scuttling the distance
into many canoes between us.
There have been times
when I confused the river
for my friend.
I threw starfish
into the wrong water,
mistaking what was potable
for a stronger tide.
I might as well pardon
my own genealogy
for bringing me here.
I’m sorry, darling,
but where we’ve been
is just no match
for standing on this bank
flexing our muscles
until the sun jumps up
and the angry fish
whip against the leaves,
the whole tableau
uncertainly taking note
of where the river goes
and what it means
as, beside it,
a dozen drunk survivalists
unzip their camouflage
to show us where they are
and what they have been hiding.

Posted by Christopher DeWeese at 7:29 AM No comments: 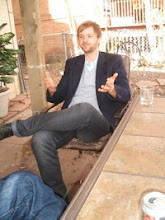